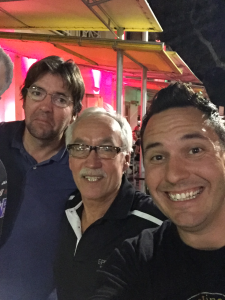 Randy Lanier burst on to the motorsport scene in the late 1970’s, eventually forming Blue Thunder Racing with Bill and Don Whittington. The group became a legend of the 1980’s, with Randy winning the 1984 IMSA GTP championship over factory rivals, and then turning to IndyCar where he steadily began to gain results by his second year. What later came to light was the entire operation was funded by a marijuana smuggling ring that Randy orchestrated, eventually getting arrested and serving 27 years in jail, only recently getting out. He tells us EVERYTHING. Yes, EVERYTHING. That’s all we’ll say. Dinner was served courtesy of Cabana El Rey in Delray Beach, Florida, with the music of Jarrod Gorbel closing us out. Thanks to Continental Tire for all of their support, and Honda for providing a great car.